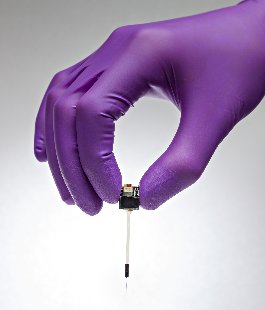 Just over a year ago, the DBC team set out to better understand the neural probe market.  We spoke to as many neuroscience researchers as we could– from current probe users to those who had never heard of them– to see how we could build a better probe.  The things that we heard over and over were that users want:

We were inspired by what we heard. With our initial probe market offering (below) we are making the commitment to change multi-channel electrophysiology, and our promise to you is that we will put you– the customer– first in that process, always.

You’ll notice that our 64 and 128 channel probes don’t come with much in the way of connectors:  just a single 12-pin Omnetics connector carrying digital output signals. High density connectors are unreliable, heavy, bulky and expensive; they don’t work well on small animals like mice and zebra finches, and they don’t scale well to increased channel count and to multiple implants in a single animal. So we got rid of them, forever. You’re welcome.

While we are always happy to work with you on novel custom systems, we are not going to be satisfied until most of our users stop customizing, tinkering, building from scratch and just generally thinking so much about their electrodes. The science you’re doing is hard enough, your tools shouldn’t be.

Drop a line and we’ll be happy to supply a product catalog and explain how to get up and running with our electrodes (spoiler alert: it’s easy.)